In this world, every day thousands to millions of people are being born and others goes to departure for never having chance to come back in our world. When we look behind and read the history then we come to know about few immortal beings, indeed they are alive with us because their high status that they achieved by living life in such a great way, and became examples for us till the world end.
It's urged that we not only remind them but also follow their path and adopt their ways of life so shall we get success like them. Islam is a religion that give women high status. Lets recalls our memories about four greatest women of Paradise. Indeed these great ladies are true source of  strength and inspiration.
Hazart Anas (May Allah Be Pleased With Him) reports that Prophet Muhammad (Peace Be Upon Him) has said: "The best women of mankind are four: Mariam daughter of `Imraan, Asiya wife of Pharaoh, Khadija daughter of Khuwailid, and Fatima the daughter of the Messenger of Allaah." [Bukhari and Muslim]
This hadith is about four women who acquired perfection in faith and character by virtue of their devotion, patience and morality. Their lives are guidance and examples for all believers, especially in times of hardship, difficulty and struggle.
Lady Asiya (May Allah Be Pleased with her) 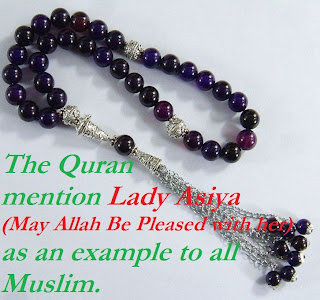 Lady Asiya (May Allah Be Pleased with her), wife of the Pharaoh, is known by Muslims as one of the greatest women of all time.
The Qur'an chronicles her as a great person and she is respected all the more by Muslims as she was married to one of the most evil men in history, but never lost faith in God and remained steadfast in prayer and belief.
"And Allah sets forth the example of muslims, the wife of Firawn.
When she said, 'O my Lord! Build a house for me in the Paradise with You and deliver me from Firawn and his work and deliver me from the people unjust."  Surah At-Tahrim : Ayat 11
God had chosen her to provide refuge to Prophet Mosa(Moses) Peace Be Upon Him, when he was an infant. When her maids brought the cradle of Prophet Mosa(Moses) Peace Be Upon Him from the river, she insisted to Pharaoh that she wanted to adopt that infant as a child:
And the wife of Firawn, said, 'this child is the comfort to me and you, slay him not perhaps he may profit us or we may take him for a son,' and they were unaware.  Surah Al-Qasas : Ayat 9
Lady Asiya (May Allah Be Pleased With Her) worshipped God in secret and praying in disguise fearing her husband. She died while being tortured by her husband, who had discovered her monotheism. 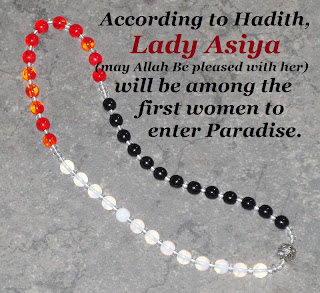 A righteous lady married to the biggest tyrant,
Her husband denied the truth so vehemently,
Yet she worshipped the One True Lord secretly,
Of Islam she was a strong adherent.
She was most beloved to the worst oppressor,
But she gave up riches amongst richest and chose to suffer,
She wasn’t willing to give up the truth,
When she was tortured for days on end, Islam was there to sooth.
A smile on her face she constantly had,
And they even resorted to calling her mad,
It was the truth and beauty of Islam that she had tasted,
Her life was for Allah only and nothing was wasted.
Years before the seeds had already been planted,
She was inspired to take in the baby Moosa (Peace and Blessings be upon him),
When it was the baby boys heads that Fir’aun (Pharaoh) wanted,
Allah’s plan triumphed and He provided the answer.
Aasiyah (May Allah be pleased with her), indeed your sacrifice was not in vain,
Allah was the witness of your suffering and pain.
Promised Jannah (Paradise) by Allah Most High,
Your beautiful story makes me want to cry.
Your love for Allah was so much,
And I can only wish that I had your strength,
You are a true and perfect example for us,
Clearly epitomising what's important in life.
2,Lady Maryam-Mary (May Allah Be Pleased With Her) 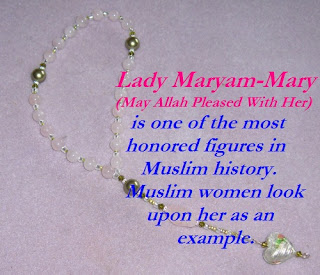 Lady Maryam-Mary (May Allah Be Pleased With Her) the mother of Prophet Isa-Jesus (Peace Be Upon Him), is considered one of the most righteous women.  She gave birth to a son by a special miracle, without the intervention of the customary physical means. This of course does not mean that she was more than human, any more than her son Prophet Isa-Jesus (Peace Be Upon Him) was more than inhuman.
Lady Maryam's respectable parents are Hazrat Emraan and Hazrat Hannah. In her old age, Hazrat Hannah was expecting a child. With the birth of a son in mind, she made an oath to Allah that the child to be born would be freed from all worldly affairs and specially dedicated to Allah's service. Almighty Allah blessed her with a daughter. And she was dedicated to the service of Allah.
The Qur'an narrates that Mary grew up in the temple of the prayer, and had a special place in the temple of her own. She was placed under the care of the Prophet Zechariah (Peace Be Upon Him).
Lady Maryam-Mary (May Be Allah Pleased With Her), grew up in a very pious religious environment, always remaining busy in the worship of her Creator Almighty Allah. According to the Quran Lady Maryam-Mary (May Allah Be Pleased With Her), was chosen above all women. 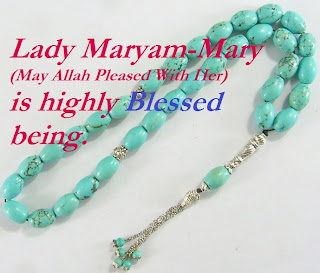 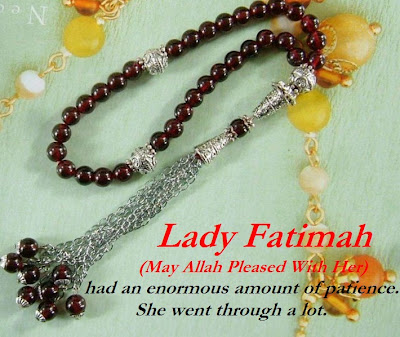 The great Lady Fatimah (May Allah Be Pleased With Her) is a daughter of the Prophet Muhammad (Peace Be Upon Him) from his first wife Lady Khadija-tul-Kubra (May Allah Be Pleased With Her). She was born a few years after the declaration of Prophet-hood of Prophet Muhammad (Peace Be Upon Him) and grew up under extremely difficult and trying times for the Prophet Muhammad (Peace Be Upon Him) and his family.
Lady Fatimah (May Allah Be Pleased With Her) called by many titles on the behalf of her moral and physical characteristics. The most used title is "az-Zahra" meaning "the shining one" After the death of her mother, as she was a patient, caring and loving child she looked after her father the Prophet of Islam so devoutly that Muhammad (Peace Be Upon Him) used to call her “Umme Abiha”, means "the mother her father." She was also known as "al-Batul" (the chaste and pure one) as she spent much of her time in prayer, reciting the Quran and in other acts of worship.
She faced many problems and difficulties but she showed an enormous amount of patience. She went through a lot. Her mother died when she was 10yrs old. And she saw her father who was known as the truthful and trustworthy being hit and hurt. She was by his side through thick and thin. And her father migrated and left her, and she then migrated after him. And she lost her 3 sisters and then her brothers also died. She remained at her father's side through the difficulties suffered by him at the hands of the non-believers of Mecca. She was patient through all of this. She is known to never had complained against the hardship that she and her family suffered. 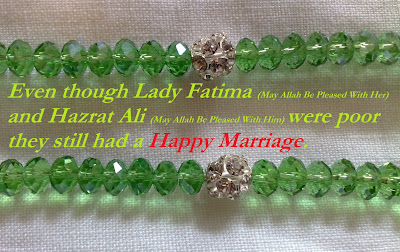 After migration to Medina, she married Ali ibn Abi Talib (May Allah Be Pleased With Him), Prophet Muhammad's (Peace Be Upon Him) cousin. She was mother of four children. After her marriage, the noble and compassionate couple led a life of abject poverty.
For several years after her marriage, she did all of the work by herself. The shoulder on which she carried pitchers of water from the well was swollen and the hand with which she worked the hand mill to grind corn where often covered with blisters. Lady Fatimah  (May Allah Be Pleased With Her) take care of the household work, make dough, bake bread, and clean the house. When the economic situations become better, she gained some maids but treated them like her family and performed the house duties with them.
Lady Fatima (May Allah Be Pleased With Her) played a major role in the life of the Prophet Muhammad (Peace Be Upon Him) and was his greatest comfort and motivation, she was greatly loved by him. She had the greatest resemblance to the Prophet Muhammad (Peace Be Upon Him) in appearance, character, walking. She was very close to her father and her distinction from other women is mentioned in many hadith. She was noble, kind and a great person like her father.
Lady Fatimah ( May Allah Be Pleased With Her) was a loving and devoted daughter, mother, wife, a sincere Muslim, and she is as an example for men and women.
Posted by Ajmal khan at 16:16 No comments: