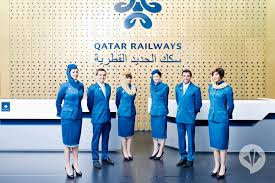 The Qatar Rail project will include four rail lines and an underground section in the centre of the capital Doha and will link stadiums for the 2022 World Cup soccer tournament to be held in the tiny Gulf state. It said the awarding of the contracts marked "a key milestone" in the development of Qatar's ambitious rail plan.Qatar Rail said construction of Phase one was scheduled to begin later this year, and expected to be completed by 2019.

Qatar Rail CEO Saad Al Muhannadi said  that “within a short period of time, Qatar Rail has signed several agreements, worth over USD 32 bn in total, to proceed with the preliminary works for the Doha Metro project and the Lusail Light Rail Transit”. Work for the Doha Metro projects is moving along as scheduled, and that for the Lusail Light Rail Transit has reached the advanced stages.
The Long Distance Passenger and Freight Rail transportation system, which will cover 350 kms in distance at a speed ranging between 220 and 350 kmph for passenger trains and nearing 120 kmph for freight trains, is currently under technical and commercial evaluation by expert consultants,” he said.

Lusail Light Rail Transit..
Al Muhannadi revealed that Qatar Rail has finalised the tunneling works for the project’s tunnels and completed over 60 percent of the structure for drilling works for its stations. Additionally, 50 percent of the structure of the bridge overseeing Al Khor and the Lusail Light Rail Transit, which is slated to be officially delivered by 2017, has been set up — the Lusail Light Rail Transit is composed of four lines extending to 30.5 km in total, among 19 km are at ground level, 10 km underground and 1 km above the ground, in addition to a 0.5-km track between two high-rises. The overall project consists of a fleet of 34 trains and 37 stations, 24 of which are on ground level, 10 underground, one located at bridge level, and two connect two high-rises.

Doha Metro
The Doha Metro network consists of four lines extended to 354 km across the Greater Doha area, connecting the city’s two central points with larger commercial and residential areas in Downtown Doha, and operating underground in busy areas, and on-and-above the ground levels in the suburbs. Moreover, the network will cover 93 stations, two of which are central and located in the city of Msheireb and Education City. The Metro lines will be distributed as follows:
- Red Line (coastal line) will traverse Wakrah City, Doha International Airport, Msheireb, Katara, The Pearl and Qatar University routes.
- Gold Line (History Line), bound from east to west, connects the airport’s northern part with Souk Waqef, Msheireb, Bin Mahmoud, Al Sadd and Al Waab
- Green Line (Education Line) trails Al Rayyan Road and connects Education City with Msheireb and Hamad Hospital.
- Blue Line (City Line) which is a semi-circular line that connects residential and commercial areas in West Bay and the northern part of Airport City with the main C-Ring Road. Additionally, the network will connect the Red, Gold, Green and Blue Lines with each other which will be implemented in two phases.

The Doha Metro project will usher in requirements of the increasing population growth in Qatar, where the Red Line-South will link Doha to Msheireb, which will be the major station and the intersection of all Metro lines. The Doha Metro Project will also operate underground in the centre of the city.
The Red Line will link Downtown Doha to the business hub area in West Bay – extending underground to reach the new Lusail city — while its Southern extension will connect Doha to the centre of Msheireb, which itself is the intersection point for all Doha Metro lines as well as its central station. The Gold Line will link  the airport to Qatar’s new national museum, Msheireb central station and the heart of Doha. Meanwhile, the Green Line will transport passengers to football stadiums that would be built in preparation for the 2022 FIFAWorld Cup.

Awarded to Samsung..
It said the awarding of the contracts marked "a key milestone" in the development of Qatar's ambitious rail planThe contracts related to Phase one comprise the Red Line North (RLN), Red Line South (RLS), Green Line (GRN) and major stations.The RLN project contract has been awarded to a consortium led by Impregilo and comprising of SK Engineering & Construction Co Ltd, and Galfar Al Misnad Engineering & Contracting, Qatar Rail said.The RLS was won by a consortium led by QDVC and including GS Engineering and Construction Corp, and AI-Darwish Engineering.The contract for the GRN was awarded to a consortium led by PORR Bau and includes the Saudi Binladin Group Company Ltd and Hamad Bin Khalid Contracting Co, the statement added.The major stations, which includes one at Msheireb and another at the Education City, was won by a consortium led by Samsung C&T Corporation and comprising Obrascon Huarte Lain (OHL) and Qatar Building Company.

“The Metro lines will operate underground in areas located in the heart of Doha. Qatar Rail will employ advanced tunnel boring machines (TBMs) using Earth Pressure Balance (EPB) technology for the tunneling works for these underground operations, whereby a circular cutting ring will break into underground surfaces, creating cylinder cavities for the tunnels,” said Al Bishri.
He said the debris of this process would then be transferred, through the tunnels, to a “dish”, as the ring moves forward and cuts through underground concrete, supported by a hydraulic functioning system. This mechanism enables not only seamless setup of underground tunnels, but proper use of the demolished concrete as a supporting layer to the tunnels’ protection shield.
Civil works of some of the 35 stations of the Doha Metro Project have been accomplished, a senior official of the Qatar Railways Company (Qatar Rail) said.

“Qatar Rail is also keen to maintain the concept of sustainability and environment friendly construction and all our contractors have four-star rating in this regard,” deputy CEO Hamad al-Bishri explained.
He was addressing the first industry awareness day for Mechanical, Electrical and Plumbing (MEP) companies that was attended by almost 300 representatives from both local and international firms.
The open meeting was aimed at getting to know the capabilities of such companies to pre-qualify for Qatar rail projects as subcontractors for the main project contractors.
“We will continue holding such meetings with both local and international companies because we need great and continuous support from all potential qualified partners to accomplish our massive project,” affirmed al-Bishri.
He said the project has multiple phases and involved a myriad of works; architectural, civil, mechanical, electrical, excavation and others. However, the project is proceeding well according to the scheduled plan
The meeting was also a good opportunity for local companies to meet their counterparts of international companies and study the possibility of forming consortiums or joint ventures. Simultaneously, Qatar Rail introduced these to both the technical and contractual requirements to be able to assume work at its project.
“There will be a link at our website for companies to upload their profiles, what they are and what they can offer and their capabilities. Then a special committee from both Qatar Rail and the Design and Billing Contractor will assess these companies and pre-qualify them for the project tenders,” said the Qatar Rail deputy CEO.
Project tenders for various related works will be offered in the first and third quarters of next year and they will be awarded in the fourth quarter for the fourth year.
The tunnel boring machines recently brought from Germany are now in the assembly phase in Doha and are expected to be operational soon. Further, all the deep excavation works are progressing well, according to Qatar Rail officials.
“The event was a good initiative to further boost the country’s economy and would reflect positively on local companies. For instance, they can introduce themselves to the global market and study possible business opportunities.”
http://www.youtube.com/watch?v=8wQmnzfF-HU
Prepared  & Collection by : M.Ajmal Khan.
Posted by Ajmal khan at 09:42 No comments: